First-time DUI Process: What to Expect at A DUI Hearing

The DUI process can be a daunting experience – especially for first-time DUI offenses. When you’re arrested for a DUI in Florida, you’re immediately booked into jail where you’ll have your photo and fingerprints taken to put on file. Even if you were given a BAC test on the scene, you may be subject to additional chemical tests during booking. After that, you’ll make your first of many court appearances after being charged.

The Denson Firm in St. Petersburg handles Florida DUI cases regularly, and we know what it takes to get you through this. If you want to know more about what to expect at a hearing and the overall DUI process, contact us about your case and continue reading to understand expectations.

What to Expect at a DUI Hearing

The DUI process starts immediately once you’re booked. Even if this is a first-time DUI charge, you’ll still have to go through an advisory hearing, arraignment, appear in front of a judge, and attend your pre-trial conference. 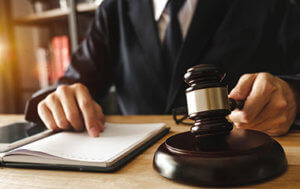 An arraignment is the formal proceedings wherein you, the defendant, must enter a plea of guilty or not guilty. This is the part of the DUI process where you’ll hear the charges against you as well as your rights. You’ll be given the option to hire an attorney at this point. This hearing is sometimes referred to as an Advisory Hearing.

Your lawyer can send in a file called a “Notice of Appearance” on your behalf. This document (or verbal representation) tells the court that you’re denying the charges, but you don’t have to be present while this paperwork is being handled. Your lawyer can file your plea (guilty or not guilty) at this point and request a jury trial. This is usually recommended, though most first-time DUI charges will not make it all the way to a jury trial. Either way, taking this action will give you and your attorney the time to compile evidence on your DUI case.

Your first appearance in front of a judge will be held within 24 hours of your arrest. You’ll be taken in front of a judge after formalities and paperwork have been issued so they can determine your bail and next appearance. This part of the DUI process is relatively quick, and it’s advised that you have your lawyer present with you during this step.

The next step in the DUI process is your pre-trial conference. This meeting takes place several weeks after your arrest, with the goal of updating the judge on your case. Keep in mind that judges usually have many cases on their docket, so this meeting happens quickly. Judges will choose to take the cases with private attorneys first and then proceed hearing cases in alphabetical order.

At this conference, your attorney will let you know of any offers available. They will inform you of the benefits of taking an offer and will be able to advise you on your best move based on the evidence and details of your individual case. If an agreement can’t be met, the judge will set a date for your trial.

Be ready for your pre-trial conference. Your attorney will instruct you to be concise in your statements as there won’t be time for lengthy discussions due to the judge’s caseload. Despite the lack of time to present anything substantial, the shorter this conference is, the better.

Motions to Dismiss the Charges Against You After your pre-trial conference, you still have the option to dismiss the charges against you. This part of the DUI process is where your attorney will come in handy. They can file for pre-trial motions and will look for any mistakes or inconsistencies in the State’s case against you.

Your constitutional protections grant you the right to have a jury of your peers decide your case. However, if your lawyer can determine that the police made a mistake in your case, then you can file a motion to dismiss the charges against you.

The four most popular pre-trial motions are:

This is filed when your attorney needs evidence and the state (not the court) refuses to provide it. Your attorney then asks the court to effectively demand the state to release it. If the motion to compel is granted and the state is unable to give you the evidence, the judge may rule that the state can’t use related evidence against you at trial, which then puts you in a better position.

This motion is filed before trial to prevent witnesses from mentioning a certain fact or anecdote at trial. If you have an arrest record, a motion in limine will be beneficial to prevent any mention or reference to it.

This motion is filed when it’s alleged that law enforcement obtained evidence illegally. Usually the attorney alleges a violation of your right to be free from search and seizure, or your right to self-incrimination. If the motion to suppress is granted, then the state can’t use that evidence against you. This can lead to a dismissal of the charge.

This motion is filed when the attorney asks the judge to throw out the case. Even if everything the state says that happened at the scene is true, this is not enough to charge you with a crime. If the motion to dismiss is granted, the charges against you will be dropped.

How Your Attorney Can File a Motion to Dismiss

A motion to dismiss can be filed if your attorney believes that the complaints against you’re not legally valid. This can be determined by small loopholes in the police work or filing, as well as larger mistakes that may have arisen during your DUI arrest. For example, according to Florida DUI law, the police officer that made your arrest must have probable cause for pulling you over. If your attorney can prove there was no probable cause at the time, your case is subject to being dismissed. A law enforcement officer may arrest you without a warrant when:

A violation of chapter 316 has been committed in the presence of the officer. Such an arrest may be made immediately or in fresh pursuit. Any law enforcement officer, upon receiving information relayed to him or her from a fellow officer stationed on the ground or in the air that a driver of a vehicle has violated chapter 316, may arrest the driver for violation of those laws when reasonable and proper identification of the vehicle and the violation has been communicated to the arresting officer.

In Florida, we have open discovery. Everything the state has against you they must turn over to your attorney. We’ll get all the police reports, witness lists, and evidence so we can fully defend your case to the judge. We’ll interview witnesses, take depositions, and leave no stone unturned in fighting for you. The arresting officer also usually provides testimony during this stage of the DUI process. Your attorney will be able to cross-examine the officer and any other witnesses who are brought in to testify.

Plea bargains are a common part of the DUI process. However, sentencing and negotiations will vary depending on the specifics of your case. A law firm in Pinellas County will work within your best interests so that you get the best deal possible. The Denson Firm has been involved in criminal justice in Pinellas County and the Tampa Bay region since 1994. We know where we can gain ground and where the State will not budge. There are options to consider during a plea negotiations. If this is your first-time DUI, then a plea might be the most favorable option. Your lawyer can request that you serve minimal probation time – the law requires:

You may be eligible for early termination of probation. It is one of the potential advantages of a negotiated plea.

It’s also likely that you don’t serve any jail time if this is your first offense. Instead, your lawyer can work to get you probation with terms you can live with.

If you’re not in favor of the results of the plea negotiations, or if your case cannot be dismissed based on the evidence presented by your lawyer, then the next step of the DUI process is to set your case for trial. Only about 1% of cases go to trial, but sometimes that is your best option. A DUI jury trial consists of six jurors. You have a constitutional right to a trial according to Florida law. Here, your attorney works to defend your case based on evidence and potential witnesses. The prosecution will try to prove your guilt and work the case against you, so it’s important to be confident in your lawyer’s defense of your case. There is substantial preparation at this stage.

Once the jury reaches a verdict, you’ll either be determined guilty or not guilty. You can leave freely if you’re deemed “not guilty” or you’ll receive direct sentencing if you’re found “guilty.” The judge will determine your sentencing based on the evidence and if this is your first-time DUI conviction.

The DUI process is lengthy. For best-case scenarios, an attorney can help you with your first-time DUI offense to dismiss your case or at the very least, negotiate your sentencing options. At the Denson Firm, we have over 20 years of experience defending individuals charged with drunk driving in Florida. We’ll work with you to understand the details of your case, from the stopping sequence to your final hearing. You don’t have to do it alone as our DUI defense lawyers will take the time to explain the law and civil processes. Our legal team will investigate the case that’s being built against you while collecting evidence that could exonerate your responsibility.

Schedule a free, confidential consultation with a Denson Firm criminal defense attorney to outline your options. You can also call us at (727) 258-5715. We answer phones 24 hours a day. Our attorneys have extensive experience defending people charged with first-time DUI/DWI offenses.